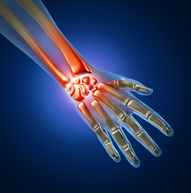 Sharon is 71, and had lost her husband in the past year. Her mother had also become increasingly ill, and Sharon had to look after her. She noticed that her wrist was becoming increasingly painful, and she was eventually diagnosed with Carpal Tunnel by her GP. She also suffered from occasional back problems, brought about my having to look after her mother. On top of this, her energy levels were low, and she felt very down.


She was determined not to become reliant on pain killers, and came across Body Stress Release. After several sessions, she noticed that her wrist was hurting her less, and had stopped clicking. Her back problems also eased, and she felt she could begin to enjoy life again, in particular being with her grandchildren. She now has regular BSR sessions, and appreciates the help it has given her in improving her quality of life.
'My wrist is much better than when I first came, and I feel much better in myself. I come away from each session feeling much more relaxed'